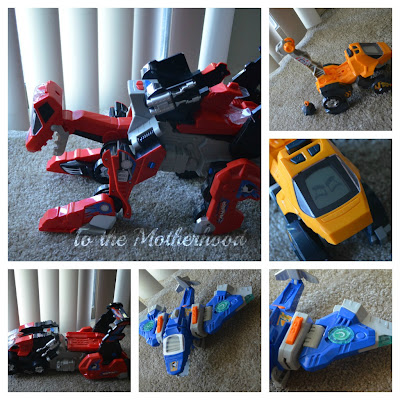 There’s nothing more appealing to boys (and some girls) than dinosaurs and cars. Combining those two together is an ingenious idea. Undoubtedly, one of the hottest toys of the holiday season is going to be VTech’s Switch & Go Dinos, which boasts seven interactive dinosaur toys that transforms into vehicles within seconds!

The line includes Sliver the T-Rex, T-Don the Pteranodon, Tonn the Stegosaurus and Horns the Triceratops ($15.99 for each), and Brok the Brachiosaurus ($49.99), Span the Spinosaurus ($29.99), and Attila the Ankylosaurus ($24.99) Each is fully equipped with a customizable LCD screen, fun and quirky phrases, and educational dinosaur facts.

My son loves dinosaurs so much that he has proceeded to change his room theme to reflect his current love for them, so I knew that the three dinosaurs (Attila the Ankylosaurus™, Brok the Brachiosaurus™, and Span the Spinosaurus™) that he received would be an instant winner. He gets bored easily with his toys, but that is inevitable since most children do. I can honestly say that these toys haven’t lost their luster yet. He has been practically playing with them everyday since he received them. They’re a fairly chatty bunch (you’d probably be too if you were extinct for all of those years) with up to 40 phrases, depending on the dinosaur. My son’s favorite color is red, so the Brok the Brachiosaurus™ is instantly his favorite! 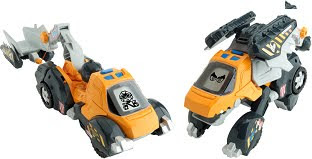 Attila the Ankylosaurus, the most strident of the bunch, isn’t one known for backing down from a brawl. His tail swings back and forth with a click of a button, and has catchy phrases, such as, “I’m an herbivore. I chow down on plants” and, “I’m built like a tank with armor all over my head, back, and sides.” When he is in vehicle mode, Attila makes several noises and yells up to 30 other catchy phrases, for an example, “I’m a one man wrecking machine,” and, “Yahoo!” You’re enabled to choose from four animated faces.

Don’t let the Brok the Brachiosaurus’ hefty stature fool you, because he is a BIG softie at heart and very easygoing, but still water does run deep if you get on his bad side. Some of his phrases include “I’m large and in charge!” or an educational fact, including, “The name Brachiosaurus means arm-lizard.” In vehicle mode, Brok makes sounds that cars do, and says up to 30 expressions, such as “Keep on truckin’,” and, “Saddle up partner,” to name a few. You’re enabled to choose from six animated faces.

Span the Spinosaurus™ can easily roll with the punches and always have a punchline to keep the kids rolling in laughter. One of his favorite jokes are “What’s up! I’m Span the Spinosaurus. Nice to eat you! Er, I mean, meet you!” He also knows when to be serious with expressions, such as “Hi, they call me spine-lizard because of the long spines on my back.” Unlike the other dinosaurs, he transforms into a plane. You’re enabled to choose from four animated faces.

Note: The batteries that come with the dinosaurs are not meant to last since they’re demo batteries, so I highly recommend buying additional AA batteries for each one you purchase.

VTech is running the Show & Tell with Switch & Go Video Contest on their Facebook page. To enter the contest your child can DRAW or BUILD their own Dino, and no purchase is necessary! Submit your entry by October 1st, for your chance to win a lifetime supply of VTech toys, one of 25 Dino toy sets and more!

I participated in a campaign on behalf of Mom Central Consulting for VTech. I received VTech Switch & Go Dinos product samples to facilitate my review.