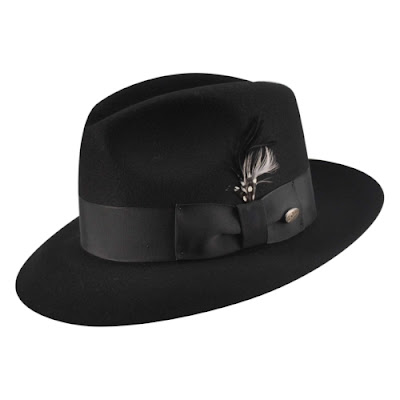 Fedora hats conjure up the image of sophisticated crooners, bank robbers, lawbreakers from the prohibition age, and heyday bootleggers. They are undoubtedly timeless, exuding style and class. They are considered by businessmen and stars from Hollywood as a staple. They have also been featured in top-notch films like American Gangsters to Indiana Jones. There’s no better time to update your look than with a new hat as the cold weather settles in on us. The Bailey of Hollywood Gangster Hat ($65; Available in Black, Cordova, or Dark Grey) is reminiscent of the gangster fedora favored by infamous crooks such as Al Capone, Dutch Schultz, Jack “Legs” Diamond, Bugsy Siegel, and John Dillinger. These men were ruthless criminals and all around bad guys, but their smooth and articulate style was undeniable.

I opted for the Bailey of Hollywood Gangster Hat in Black, because the feather accent made it stood out from the other hats. However, the lining is what makes it really unique since it features images of iconic gangsters. It’s beautifully constructed of 100% wool and has a wide grosgrain headband & bow. It sells for $65, which is quite a deal due to the quality hat you will receive. My oldest brother loves wearing hats. So, I know that he will look dapper in his new hat!

I received one or more of the products mentioned above for free using Tomoson.com. Regardless, I only recommend products or services I use personally and believe will be good for my readers.