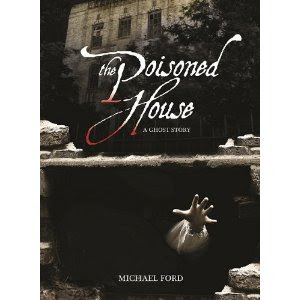 Fifteen year old Abigail Tamper is a servant at Greave Hall, a hauntingly beautiful house that’s surrounded with mystery, lies, and greed. Her mother died of Cholera not too long ago, but that starts to be questionable. Mrs. Cotton, the cold-hearted housekeeper, watches Abi’s every move and pounces at every opportunity when she falls short. Abigail even tries to escape from the mansion’s clutches, but she does so unsuccessfully when she’s brought back. Lord Greave, the owner of the house, is slowly caving into the brinks of insanity. Samuel, Abi’s childhood friend and Lord Greave’s son, is her only protector. However, he becomes badly wounded from his service in the Crimean War. The servants of the house are in fear of the housekeeper because of her deviousness. An other worldly presence starts making itself known by stirring up trouble in an already troublesome household.

The Poisoned House is a chilling ghost story set in Victorian London. Michael Ford’s writing style is so captivating that you’re instantly transported into 18th century London, which made it hard to put this book down until I got to the last page. I’ll admit that I was a bit surprised who the culprit was, but that didn’t make me think any less of this book.