Based on a miraculous story about the power of faith, Captive is an “amazing, inspiring” drama about the spiritual collision of two lost souls, Brian Nichols (David Oyelowo), on the run from police and desperate to make contact with his newborn son, takes recently widowed mother Ashley Smith (Kata Mara) hostage in her own apartment. Fearing for her life and desperately hoping to see her daughter again, she turns to Rick Warren’s The Purpose Driven Life: What on Earth Am I Here For? for guidance. Ashley and her captor face a crossroads where they discover hope and light in the midst of despair in the moving film that Dick Rolfe, CEO, Dove Foundation hailed as “powerful.” 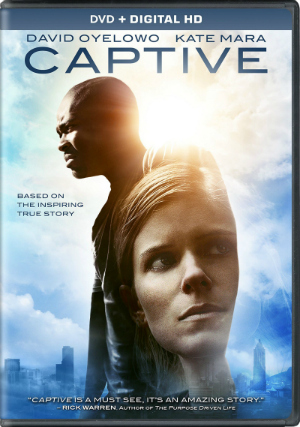 There are over 30 minutes of bonus content on this DVD including Journey Through Darkness: Filming Captive and Faith and The Purpose Driven Life. Also included with this DVD is a Digital HD copy that can be instantly streamed and downloaded.

It is seldom when I can sit through a film without taking a break, but Captive captivated my attention from the beginning to the end. It was intense, suspenseful, and kept me on the edge of the seat throughout the duration of the movie.

I like how this faith-based film was able to be straightforward and frank without sugarcoating the truth of the real-life events that inspired its creation. The rock-solid and flawless acting added depth and authenticity to the film. It’s a movie that truly defies all odds and stereotypes that not all Christian films are under budget, poorly acted, preachy, or hokey.

I’ll admit that some parts of the film were hard to stomach, whether it was Ashley Smith (Kata Mara) struggle with her methamphetamine addiction after her third unsuccessful stint at drug rehab or Brian Nichols (David Oyelowo) going on a murderous rampage to just have the opportunity to see his newborn son.

I don’t want to delve further with details to avoid being a movie spoiler, but I will say that I found the movie to be compelling and thought-provoking. It proves that no one has to be perfect for God to use us in significant ways.